Android developers have been building amazing Mobile apps for Android. Finding and locating the app however, is a different game. Developers have to have the right strategies in place in order for their app to rank on the Playstore and that part can be quite tricky. Google have now introduced a variant of an Android mobile application: Android Instant Apps! It allows Android Mobile apps to run instantly without requiring the end user to download the apps from the Google Playstore.

Android Instant Apps are all about sharing and discovery. The difference between a simple Android Mobile app and an Android instant App is easy, in order to use a normal Android mobile apps you need to download the app, identify yourself and sometimes even pay for it. However, with an Android Instant Mobile apps everything is quicker and easier. Instead of downloading the whole apps, Android Instant Apps will allow you to feature specific segments of your mobile app ready to be used by your end users without having to download the whole app. The concept is very similar to the web functioning, as it would allow the users to go through an Android Instant Mobile app as easily as navigating on the web, you can click on a link and land on a web page and here's the kicker......it's all Native!!

Instant Apps let you get the full experience of what you love about native applications - fast, beautiful interfaces, native perfomance and capabilities with just a tap. This is going to be a huge change and probably going to take a while before being settled up. But we all know that this is going to create a resolution for Mobile apps. 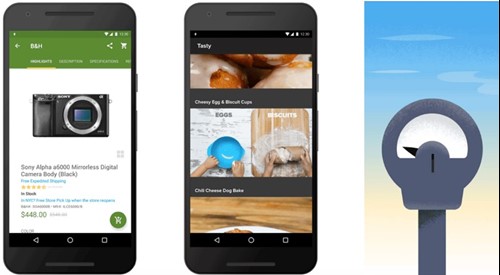 Compatible with most Android Devices

Will your clients have to go through the mobile application development process again? No, your developers can easily upgrade your existing Android app. Instant Apps use the same Android APIs. If your mobile app was developed and designed correctly, it can take less than a day to get up and running with your core native mobile app features as Instant Apps. As long as your app is properly modularized, Google Play will only download the necessary features on the fly.

If you want to know more about Android Instant App, a video of Android's developers says it all !