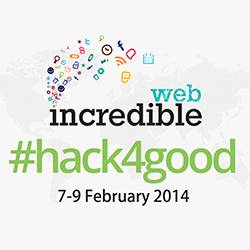 Incredible Web, as Geeklist Ambassadors in Malta, were assigned the role to organize and run the first global #Hack4Good hackathon in Malta during the weekend 7-9th February.

"#Hack4good is an international, multi-city hackathon movement that has taken the world by storm and set the bar for bringing together software engineers, hackers, ui/ux designers, product developers, founders, leader, thinkers, and civic minded organizations together to "hack" together for social good. Geeklist #Hack4good 0.5 will take place for 48hrs from February 7th-9th in 40+ cities worldwide with over 5,000 of the world's top developers and designers coming together to make the world a better place."

The event was held at the Microsoft Innovation Centre, Skyparks, offering top of the range facilities and a fantastic working environment and considering some developers didn't even leave the premises for more than 24 hours, perhaps it was a bit too comfortable after all. ;)

Participating in the #hack4good 0.5, there were some massive global NGOs involved, including Amnesty International, Oxfam, UN OCHA, Concern Worldwide, etc; whilst there were also a few local players, including Inspire Malta, SOS Malta and aditus. Each of them submitted their own ideas which were presented to the developing teams, which ranged from mobile apps, a name & shame web app or a 'kickstarter' for fund-raising events. Teams were also able to come up with their own ideas, as was the case for our winning team.

The teams were then given a maximum of 48 hours to work on their ideas, until required to submit fully-working prototypes. They might have been buggy, they might have not been perfectly responsive, but they did work; and it is amazing to see how much could be done in 48 hours.

Teams were then judged locally based on their impact, creativity and implementation. The winners would then compete globally, where an international judging panel including some of the best and brightest minds in the industry decide on who the world-wide champion for this year's event is. The judges included the creator of Bittorrent,  the founder of Quake Labs, starter of webOS and iPhone, CTO at Eventbrite and so many more.  Unfortunately to date we still do not have word on the global winners, but we expect them to be announced at the end of this week.

Having said that, let's introduce you to our local winners...

Our local winners came up with the idea of creating anonymous relationships using a unique identifier. The idea is to facilitate the work of the International Red Cross or other NGOs which help lost or stranded asylum seekers. Currently, when asylum seekers are separated during their voyage, the NGOs have to manually show photos of the lost persons in the hope of reuniting broken families.

Using Life Line, refugees will be given a unique code identifier, for example DEAB-1A24; which they will have to remember throughout their voyage. It is important to note that all data is gathered anonymously, and the system has no data which can connect DEAB-1A24 to a person thus it will never compromise the refugee's identity; which was an absolute priority for the migrants.

The application would then allow users to create relationships with other anonymous users by inputting their respective user identifier. Ultimately this would allow lost migrants to give their code to assiting NGO and find out where their lost familiars are located.

The application was build for Windows Phone and Web on the .NET Stack.

Our second placed team followed onto an idea suggested by Inspire Malta. The idea was for a crowd-based fundraising, similar to Kickstarter, but for fundraising causes.

"I had designed the concept of an online fundraising portal that allowed the public to set up their own fundraising page for any registered charity. They would share their page on social media and encourage people to follow them, leave comments of encouragement etc. The site & app would allow the user to select a charity, a preloaded event (like the malta marathon, for example) or create their own. Add their photo and message and every donation clicks through a portal that goes into the registered charity's account. The page would have a 'thermometer' that increases towards a target to be raised as donations come in real time. So a charity like Inspire or Caritas could have 100's of people fundraising small amounts for them at zero cost (the site would keep a small % of the donation to cover hosting, bank charges and admin costs).NB You could also have a 'bypass' where people can just use the app to donate directly to the charity. It needs to be secure and reliable and sync to the e-merchant accounts of the various charities. It would be amazing to have this! (there are some other similar sites but they only use paypal, and have very limited features.) No one has really managed to make this work effectively integrate with social media and have an impact on 'crowd fundraising'."

Differently from any other crowd fundraising however, Coin4Good opted to use Bitcoins as the base currency for their platform. "The idea of using Bitcoins is to avoid any transaction fees (1% max over $1m donations per account). Once we get enough traffic, we can add more payment methods like visa or paypal and sell advertisement space on the site to cover for maintenance costs and transaction fees. That way all the money donated will go to charities. Also, one more thing that sets us apart is that the money is directly transferred to the charities CoinBase's wallet, so the person raising funds will never receive the money, but will go straight to charity wallet."

The website was built using Ruby on Rails, Bootstrap and AngularJS.

Once again, thanks to our sponsors for making this possible; and stay tuned for updates on this event and future hackathons.